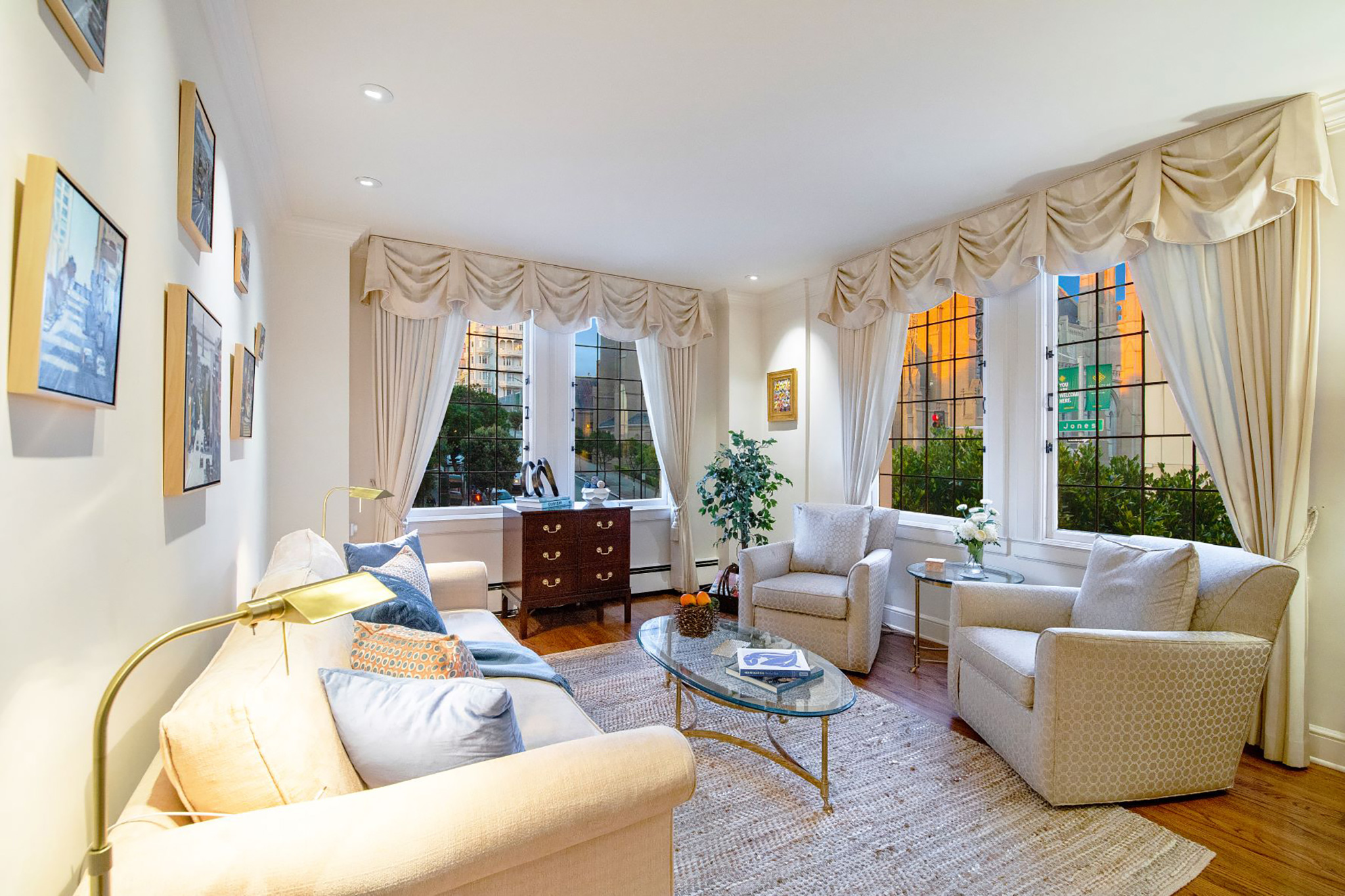 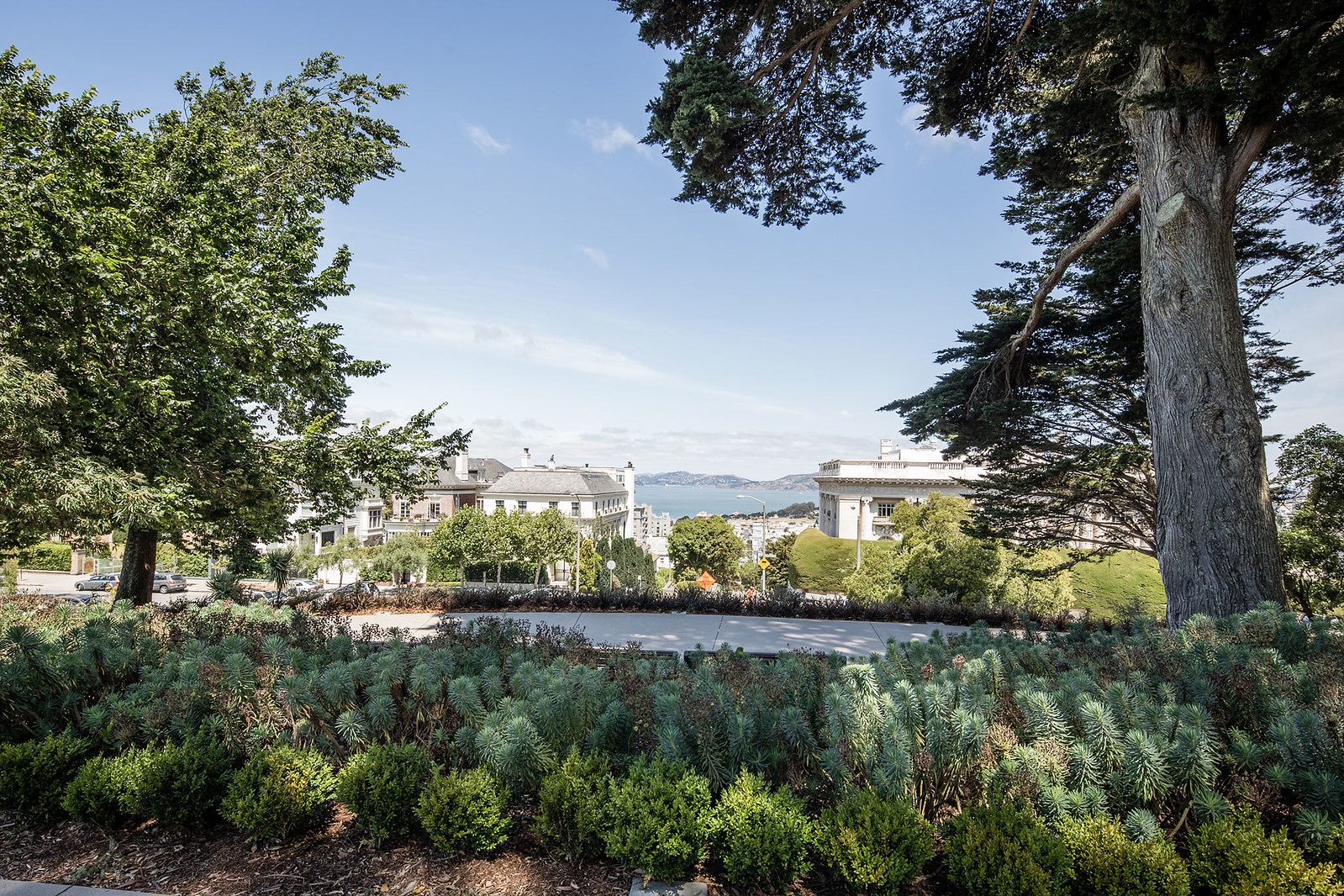 Enjoy an unparalleled urban lifestyle in San Francisco’s most Parisian-style neighborhood- from the casual European-style neighborhood cafes and the elegantly manicured Huntington Park with its well-known fountain, to the haute-cuisine restaurants and chic night-clubs in some of the world’s grandest hotels.

Its location in the heart of the City is close to booming world-class tech and financial centers of Jackson Square, the Financial District and SoMa, as well as the internationally acclaimed shopping and dining of Union Square and Downtown, and the Broadway-style entertainment of the Theater District- a quintessential San Francisco lifestyle at the center of one of its most vibrant historical neighborhoods!

- An elegant entrance foyer with beautiful hardwood floors and generous closet space on either side. provides a warmly inviting welcome to the residence-

- The lovely primary bedroom enjoys romantic views of the Cathedral and the tree-lined street with the iconic cable cars below. A large walk-in closet with floor to ceiling built-ins and luxuriously appointed marble bath with walk-in shower (also accessible form the hall so it double as a guest bath/ powder room) complete the well-laid out floorplan.

This historic building, built in 1927 at the pinnacle of Nob Hill reveals the glamorous design creativity and structural integrity found in the other historic Nob Hill properties built by the same prestigious Parisian-trained architect William Weeks who also designed and built the historic Nob Hill hotels: The Mark Hopkins and The Huntington. Its Spanish-inspired historic and luxurious lobby has been maintained to preserve its historic elements and unusual detail.

This building with its stunning façade and exceptionally decorative portico became famous after Dashiell Hammett made it the home of character Bridget O’Shaughnessy, in the book and movie the “Maltese Falcon”; the building was known as “the Coronet” in the movie. Well-known residents have included movie directors Wayne Wang and John Waters.

In the heart of Nob Hill, Cathedral Apartments’ 17 floors provide some of the most magnificent views in San Francisco. The building’s luxury services include: 24-hour doorman service, a full time on-site management office, and a huge, gorgeously landscaped south view terrace for the use of owners, whether for personal sunbathing or lavish parties.

Charles Peter Weeks was born in Copley, Ohio on September 1, 1870, the son of Peter and Catharine (Francisco) Weeks. He was educated at the University of Akron and obtained some preliminary experience working in the Akron office of architect Charles Snyder. From 1892-95 he attended the École des Beaux-Arts in Paris, having been accepted into the atelier of Victor Laloux. Returning from Paris, he worked in Cleveland for a while and then moved to New York, initially working as an interior decorator, until joining John Galen Howard at the firm of Howard & Cauldwell in 1899. He had first worked alongside Howard in Paris in the atelier of Victor Laloux, then renewed the acquaintance through the Society of Beaux-Arts Architects, of which Howard was President.

Weeks wrote a plaintive article for the June 1906 Architect and Engineer titled ‘Who is to blame for San Francisco’s plight?’, referring to the earthquake and fire damage, which criticized owners for lack of concern for quality, the City for inadequate inspections, architects for acquiescing on cheapness, and contractors for not giving value for money. In April 1907 he wrote another article on the renaissance of apartment houses in the City, which featured several Sutton & Weeks designs, including 698 Bush at Powell. Sutton moved to Hood River, Oregon in 1910, after a divorce, leaving weeks to practice on his own. During this period Weeks designed several buildings, including:
- 765 Geary (48 apts.) & 580 O’Farrell (an SRO, 1911);
- 1155 Leavenworth (1911, now 21 TICs):
- 2150 Washington (1914, for Mary Phelan).

Weeks died on March 25, 1928 in his apartment at the Brocklebank.

The neighborhood remains one of the most affluent and desirable in all of San Francisco with its historic, yet vibrant character. With its stunning Beaux Arts-style pre-war luxury buildings decorated with wedding-cake facades, the magnificent palace-like Fairmont Hotel, and emblematic Grace Cathedral, Nob Hill is truly San Francisco’s own version of Paris. It has also been the scene of many famous movie and television filmings over the decades from Alfred Hitchcock’s timeless Vertigo in the 1950’s to 2019’s Matrix 4 with Keanu Reeves which was recently filmed there, as well as the long-running TV series “Hotel” which was set at the Fairmont Hotel- and countless others.

The heart of Nob Hill is Huntington Park and its incomparable 10-foot tall Fountain of Tortoises. Shady benches around the classic urban square provide a welcome rest for those who hike up the hill- and a children’s playground is a hidden gem. In addition to its acclaimed world-class restaurants, charming neighborhood eateries dot the neighborhood. The Masonic Auditorium, a classic example of Mid-Century architecture, is also used as a venue for concerts and events. During the Holiday Season the Laurel Court Restaurant at the Fairmont Hotel features the largest gingerbread house in the world and is a huge attraction for locals and visitors alike- both children and adults!

Nob Hill is conveniently located in the heart of the City, in the midst of world-renowned hotels, hight-end boutiques, and theaters, as well as Chinatown, North Beach, and Union Square. The Theater District, Financial District and SOMA’s booming technology center are perfect for enjoying a sophisticated, yet comfortable urban lifestyle.